CD: Somewhere South of Heaven
John's current CD, Somewhere South of Heaven, is available for mail order. The CD contains five well known standards and five of John's original songs, including "Maybe Someday" and "Saloon Song". Both of these songs have received national and international airplay.
This CD can be ordered for US$17.50 plus US$2.50 shipping. Click here to get the order form.
John's CD is now available for purchase on the website CD Baby!
This CD may also be purchased at the following stores:
TRACK LISTING - FOR ORIGINAL SONGS, CLICK ON THE PLAYER BARS TO HEAR SAMPLES
1. Maybe Someday
2. I Only Have Eyes For You
3. Hold Me In Your Arms Again
4. Somewhere South of Heaven
5. It Had To Be You
6. Ace In The Hole
7. Saloon Song
8. Again
9. Al Di La
10. Gone Without Goodbyes
What people are saying about Somewhere South of Heaven
Review in Primo Magazine, Second Edition, July 2019
John Primerano has an extraordinary voice, in line with the passion and emotional range of great Italian crooners.
Years of voice training and piano lessons while growing up in Philadelphia is part of the journey. A formal study with the mastery of scales, notes, and chords is adjoined with endless observation of great singers and musicians for contrast and comparison. We get it all and then some in Primerano’s phenomenal CD “Somewhere South of Heaven.”
What immediately impresses you about Primerano’s work is his originality. He wrote and arranged half the songs in “Somewhere South of Heaven,” including its title track. Why this is especially unique is
the style of music - jazz and traditional pop; with one song that’s country. Frank Sinatra said in an interview a few years before he died that a great frustration in the latter stage of his career was the lack of new and original songs in jazz and traditional pop. Neither rock nor R&B could apply. It has been too long since we had the likes of Burt Bacharach or Jimmy Webb to write fresh material, either in jazz or traditional pop.
Enter John Primerano.
His songs could be sung by Sinatra, if he were still alive, or any of the top line crooners…including himself. Primerano has a wonderful voice and it shows in the entirety of the CD.
The first song “Maybe Someday” is very melodic with piano, front and center. The song was written and arranged by Primerano and conveys the theme of originality throughout the CD. The second and third
songs show off his vocal range. There is Henry Warren’s classic “I Only Have Eyes for You” and Primerano’s own, “Hold Me in Your Arms Again.”
The title track “Somewhere South of Heaven” has all the makings of a country music hit. The song begins in acapella:
“Somewhere south of heaven there is a girl who won’t do me right.
But, somewhere south of heaven I found a haven from the night.
She says she will never leave me, but I know here too darn well.
She’s somewhere south of heaven but she’s a little bit north of hell.”
When Primerano sings the wonderful jazz ballad, “It Had to Be You,” he touches all the notes in brisk vibrato. “Ace In the Hole” follows as an old jazz song that dates back to 1904, written by James Dempsey
and George Mitchell. Primerano is no doubt versatile; as comfortable with this song as he is with anything in the contemporary vein.
Up next is “Saloon Song,” written by Primerano. One immediately thinks of Sinatra’s “One for My Baby.” This might be Primerano’s best song. The takeaway lyrics:
“So let me hear that saloon song.
Play me that star-crossed lover’s score.
No time to hear a moon June spoon song.
Just make it sad…I do implore…while I am sipping on number four…”
“Again” is a song from 1949 by Dorcas Cochran and Lionel Newman. Primerano sings it as good as Vic Damone did 70 years ago. Italian is heard when he sings “Al Di La,” a song originally composed in
1962 by Carlo Donida with lyrics by Giulio Rapetti, a.k.a. Mogol. The final song is “Gone Without Goodbyes", written and arranged by Primerano. It is a fusion of jazz and R&B and could easily be a mainstream
hit on today’s pop radio.
Music and singing are tied together in the DNA of all Italians; but some do it better than the rest of us. Count John Primerano among them. He has the creative talent and voice that makes “Somewhere South
of Heaven” a most cherished CD.
Compliments from The Amazing Kreskin

Compliments from Vito Fera Owner, Network Sound and Video, Inc.
It's hard to describe a guy who is much smoother a singer/songwriter/pianist than John. His CD is a must have for your music collection!
Compliments from Dan Singer
Several years ago, before John's CD was completed, John was performing in New York City. During the engagement, John spoke with InTune International's album reviewer Dan Singer, who was in attendance. Upon hearing John's original songs and learning of John's plan to release a CD, Mr. Singer suggested to John that the name of the album should be "I'm Too Good For This Room".
Patricia Vinci, author of Frank'ly Dickens and President of the Philadelphia chapter of the Dickens Society
Primerano’s CD, “Somewhere South of Heaven”, has a fine selection of songs that he sings in the always appealing free and easy style of Bobby Darin. In addition to the standards, John sings five lovely songs that he composed and accompanies himself on the piano. This excellent musician/composer/song stylist is adept in setting a soft romantic mood in listening; a mood where you feel you are the only one listening and John is singing directly to you. It is reassuring to know there is still talent out there producing the kind of music many of us still long to hear.
O's Place Jazz Magazine, February 2011
O's Notes: John is a balladeer and pianist. He teams up with bassist Ron Cochran and Sal Centola (d) to record a mix of ten originals and classics. They use electronics to fill in where appropriate and keep things swinging. Primerano is a veteran musician based in Philadelphia. This 2007 release showcases his depth as a performer with ballads, country, pop tunes. It is a good representation of the man and his music.
Big Band Buddies Magazine (U.K.), March 2010 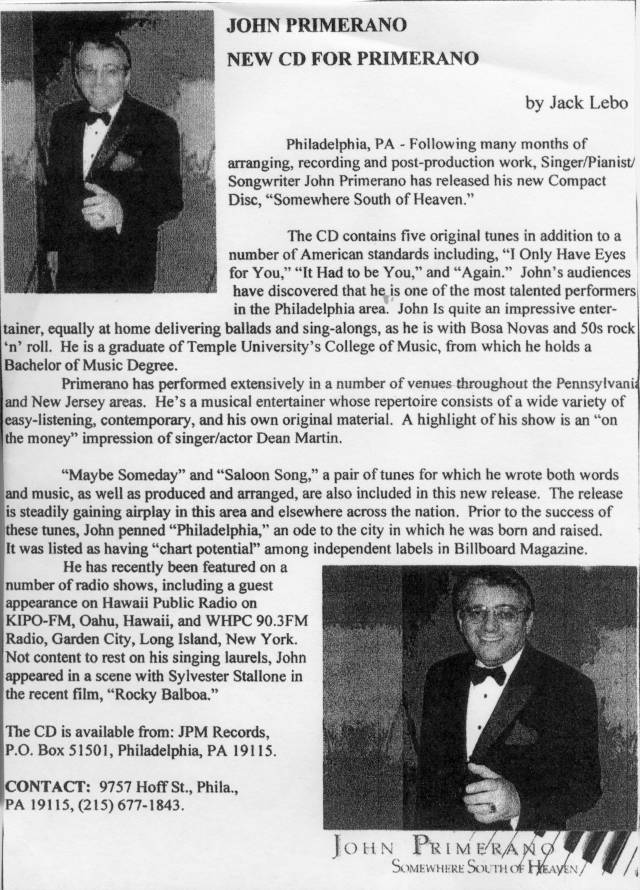